Hello, and welcome to the MP2 Games tech blog! I’m Mathias, and this is the first entry in what will hopefully become a long series of technical deep dives into some of the work we do at MP2.

Recently, we have been working on getting a large JavaScript game to run on game consoles. To make that happen, we made use of ChowJS, our ahead-of-time JavaScript compiler and runtime which can target game consoles.

Note: We will assume some knowledge about gamedev, JS and compilers to keep things short.

Note 2: ChowJS is not directly related to Chowdren, which is our compiler and runtime for Clickteam Fusion and Construct 3.

JavaScript is a very popular programming language, and for good reason. It’s easy to build JS applications quickly, the ecosystem is amazing, and there is great support for JS on platforms like PC and mobile through browsers or runtimes like Node.

The story is a bit different if you are building a serious multi-platform game in JS. In particular, the path to getting JS to run on game consoles has been problematic for a long time. Why is that?

To execute JS programs, you need to make use of a JS engine. Some popular choices today include

Common for all of the major JS engines is that they make use of just-in-time (JIT) compilation. Briefly, this means that code is optimized and compiled to machine code at runtime, and this turns out to be very important.

V8 with JIT disabled can be 5x or even 17x slower than V8 with JIT enabled, which is a dramatic difference. To put this into perspective, let’s say your game is spending 8ms to complete each frame under standard V8. Assuming a 5x slowdown when disabling the JIT, this would result in a frame time of 40ms, running well below any 60 FPS target.

With game consoles often running on constrained hardware, a JIT is then critical to achieve acceptable frame times. However, most consoles don’t allow user applications to create executable code at runtime, effectively removing the possibility of using a JIT.

To run JS on consoles, you are then left with 3 options:

For performance reasons, using an interpreter turned out to be infeasible for us. In our case, we also have the following constraints:

For that reason, rewriting the entire project was out of the question, and that leaves us with AOT compilation. We are now happy to present our solution to this: a JavaScript engine called ChowJS.

Sidenote about related work: As far as we are aware, Hermes is the only production-quality AOT compiler for JS. Unfortunately, it only compiles to bytecode and not machine code, and does not support all the features we need. Some non-public compilers have also been made for specific games, like Rob’s JavaScript → Haxe compiler. Rob’s compiler was made to support the specific JS subset used by CrossCode, and I don’t think the same approach would have worked for us. Lastly, Fastly recently announced this, but it seems like it only implements a JS interpreter in Wasm for now.

ChowJS is a fast AOT engine for JavaScript. It has the following features:

ChowJS is heavily based on QuickJS, which we found to be an excellent JavaScript engine to hack on. In particular, we borrow the bytecode, interpreter and the ECMAScript support from QuickJS.

How does it work?

One important observation is that most JavaScript programs exhibit fairly static behavior after their startup phase, and this is also why JITs work. After startup, prototypes are very unlikely to change, most globals don’t change, and so on. In an AOT context, we can still capitalize on this.

Here is an overview of how ChowJS would compile this program: 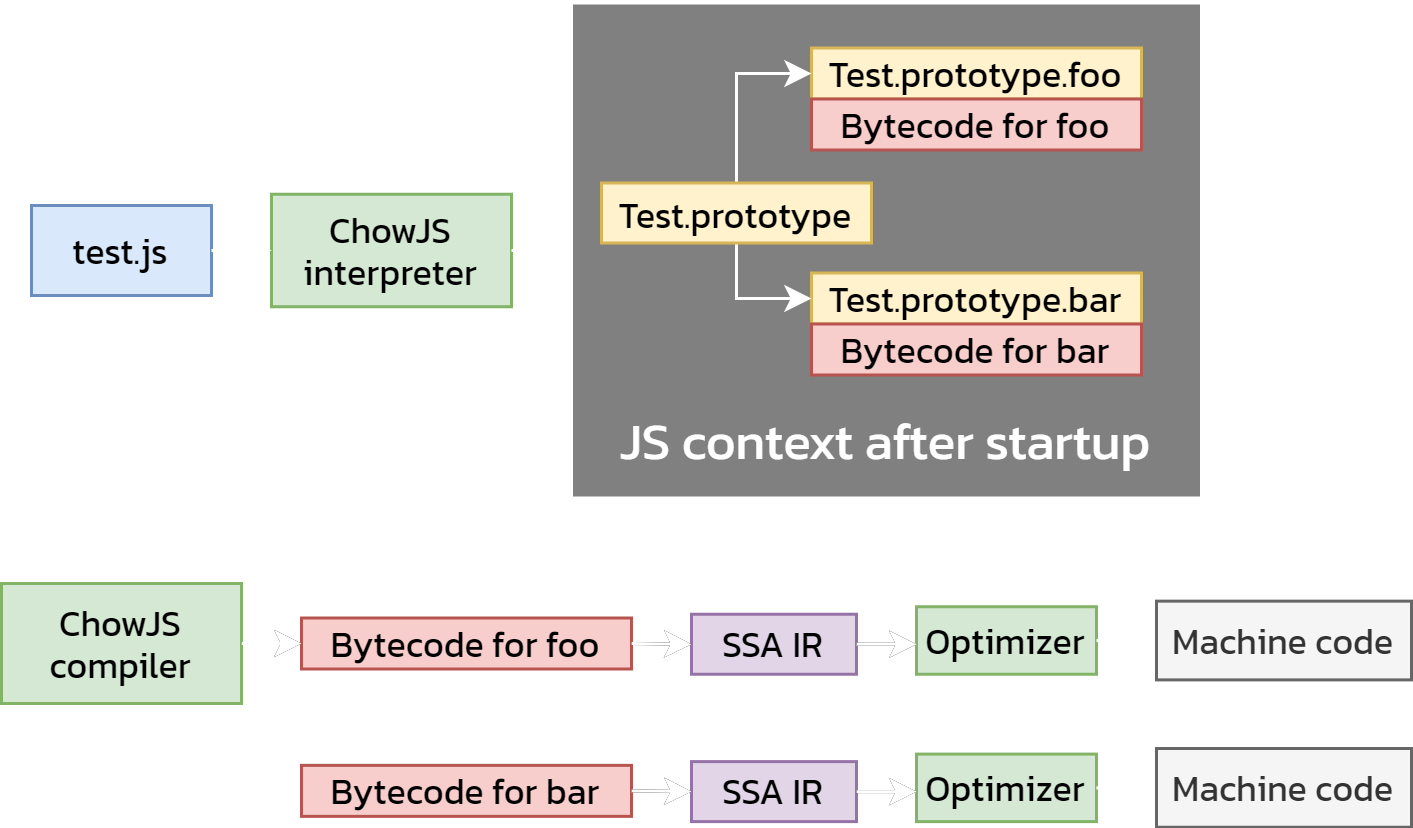 To elaborate, here is what is happening:

For AOT compilation, it is critical that we have access to the startup JS context, since this makes user objects, prototypes and methods available to us at compile time and makes optimization a lot more straightforward. For example, when compiling bar, we can show that foo is part of the same prototype as bar, making the this.foo() call an excellent candidate for function inlining.

We will now do a brief review of important parts of the compiler. If you don’t have a keen interest in compilers, feel free to skip to the Performance section.

The bytecode generated for this function is as follows:

The bytecode is stack-based. For example

To handle control flow, instructions like return_def, call and if_false are used. For example, if_false will jump to the given address label if the first value popped from the stack is false, while goto will perform an unconditional jump.

The bytecode is designed to be executed by an interpreter, but aside from simple peephole optimizations, it is difficult to manipulate. For that reason, we transform it into an intermediate representation (IR) that is much more amenable to analysis and optimization.

ChowJS uses an IR in static single assignment (SSA) form with a control-flow graph (CFG) to represent control flow. In SSA form, each variable is assigned exactly once, and we use ϕ (phi) functions to merge values from different basic blocks.

There are several ways to go from a stack-based bytecode to an SSA IR like ours, but here are some valuable references:

The initial and unoptimized IR for the printParity function is as follows:

Instructions now have explicit output and input values, and it is simple to infer relationships between them. Also note that %8 makes use of the phi instruction to select either %7 or %6 depending on which basic block we came from.

We run through a number of passes to transform the IR:

Here is what the IR for printParity looks like after all passes have run, but before going out of SSA form:

There are several things to note about the above:

Let’s take a closer look at some of the important passes.

CacheValuePass plays an important role, since it transforms many constructs to push_val instructions. That is, it tries to evaluate instructions at compile time, and we refer to this process as caching. This helps subsequent passes with optimization since they can work with values that are known at compile time. Some examples of what this pass does:

This pass makes heavy use of the “startup” JS context that was obtained earlier, since it needs to explore prototypes and objects from the user program.

InlinePass performs function inlining. Inlining is very important since JS calls have overhead associated with them, and being able to inline short methods (especially getters/setters) is a huge win. Inlining also helps subsequent optimizations, since they are given much more context to work with.

This pass is limited by how well CacheValuePass can cache values, since otherwise, the pass cannot make any assumptions about what methods are being called.

The Typer performs intraprocedural type inference, mostly to enable the Lowering pass to make decisions about how instructions are lowered, but also to determine whether values need to be reference counted. This improves performance by eliminating some type checks, and also helps alleviate the cost of reference counting.

Note that some of these optimizations (especially the CacheValuePass pass) are overly optimistic and will not work in all scenarios. To account for this, optimizations in ChowJS are highly configurable. This is critical in an AOT context where certain assumptions cannot be made without breaking semantics.

To make it more straightforward to configure optimizations, ChowJS can be compiled with checks enabled to determine if any assumptions are violated.

While the IR is used to compile the vast majority of code, a fallback is sometimes needed when features such as eval are used. This means there are several tiers of execution:

The unoptimized machine code runs about ~1.6x faster than the interpreter.

Here are some scene update timings for an intensive scene in the game, measured on a handheld console. The update times were averaged over 50 frames, and we used V8 8.7.220.31 for our test:

For this scene, this means:

In particular, this brings us from sub-30 FPS with V8 to 60 FPS with ChowJS.
Mission accomplished!

As an extra win, compiling JS methods to machine code makes it much more painless to profile JS applications using regular C/C++ tools. Here is a ChowJS executable being profiled by one of our favorite profilers, Superluminal: 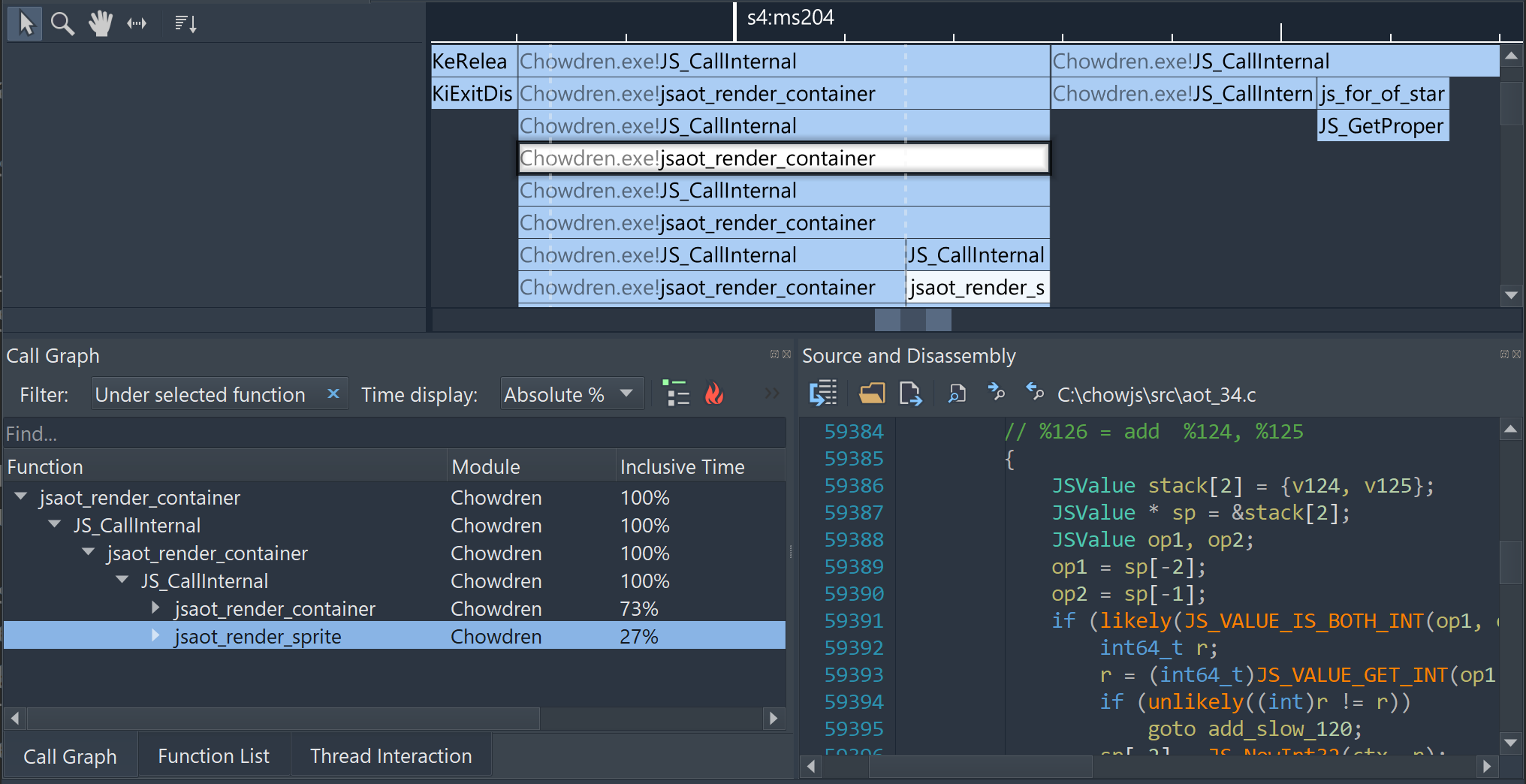 Are you making a commercial game in JavaScript, and are you looking to bring it to consoles? We’d love to talk!

You can get in touch at hi@mp2.dk.